As the 8th of February past, I started to remember what happened on that day forty years ago.  It had been cold enough for the ice to freeze at the local Ice Skating “Rink”.  It was really an old ice pond where they had harvested ice for preserving food in ice boxes through the summer.  But in my day we had refrigerators and didn’t need the ice anymore. Anyway, we usually only had a couple of weeks to skate and I wanted to take full advantage of the time I had.

I went to skate right after school and my dad came to pick me up for dinner.  I didn’t want to quit so I ignored him and he finally went home.  I had a scout patrol meeting that evening so my dad came back to get me.  I saw he was there and was getting ready to leave when I got into a play in the hockey game where we were all fighting over the puck.  The next thing I know, I am falling down and hear a loud crack.  I didn’t know if it was the ice or my leg. The other players helped me off the ice on one leg and they took me into the warm-up shack.  I was soon helped to my dad’s car and taken home.

Later that night I was taken to Nyack Hospital and x-rayed. I had broken both my right tibia and right fibula.  I spent the night at the hospital, and the next ten weeks in various casts.  The first was most of the way up my thigh. Eventually they were walking casts with a removable boot.  It was months before I could walk without a limp.

Looking back on that experience, how much pain and suffering could I have avoided if I had just gone home with my father when he came the first time? I knew I should have gone with him, but who would have seen the consequences?

The sad thing is this isn’t the only instance where I can look back and see the consequences of not doing what I should or not being where I should be.  What would have happened on 13 November 2003 if I had left for Church on time?  Instead, I was just leaving when I should have been there.  Again another accident, this time with a totaled car and multiple broken bones.

My mom has been saving these pictures for all these years.  I thought they would be good to share.  For most of you who have always had individual pictures, they used to only take class pictures.  The first 4 years I was in Sparkill Elementary School.  For Fourth grade they changed the school boundaries and I went to Tappan Elementary School so most of my classmates changed.  In each school we had 2 or three classes per grade so every year we had new kids in our class.

In the First grade picture, my cousin Debbie Post is in the center of the back row.  If I dug out my high school yearbook, I might be able to name most of my classmates.  I remember some of them but not all.

Mrs Hartmuller retired after my year with her.  She was the one elementary school teacher that had a big impact on my life.  We had to read 15 books as a minimum and do a report on each of them that year, and I really had a hard time finding a book to read.  She planted a book in the closet in her room and made me believe it was a special book that she thought I would like.  I read it and it kicked off a love for reading where I couldn’t get enough to read.  It was a part of a series and that helped me find additional books to read.  I still have a box of books from that series that I bought and read during 4th, 5th and 6th grades.

My mom asked me to keep this booklet from their marriage ceremony and she gave me a note card with a drawing of the church where they were married.  I thought it was best to share it with everyone.

The attached picture is my only claim to fame at BYU.  It was actually about 1/4 of a newspaper page in size.

The story behind it:

I was in an intermediate Racquetball class and my teacher had directed the class to play with our wrong hand to develop cross-body coordination.  My opponent and I were struggling with this when a knock came at the door.  It was a reporter with the Daily Universe (BYU Newspaper) and he said “You guys really look like you know what you are doing, do you mind if I take a few pictures for an article we are doing on fitness for the paper.”  We agreed as long as we could use our regular hands.  He took pictures of both of us serving and mine made the paper.

Aunt Jayne saved a copy and sent it to our Mom & Dad. 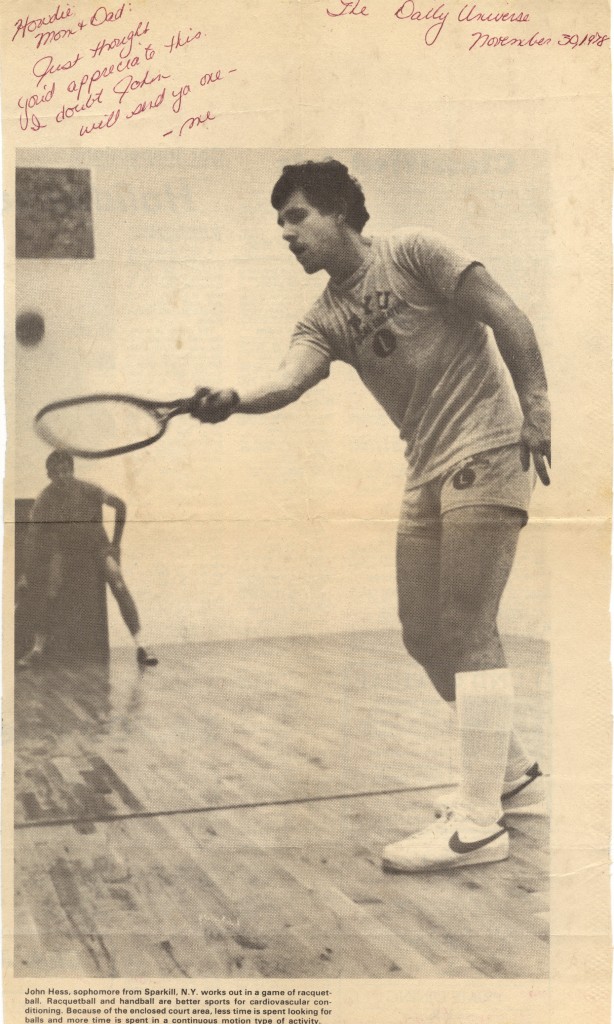 As I have gone through my records, I have found a few more remembrances of my dad.

I found a note from Vicki Vibbert where she says: 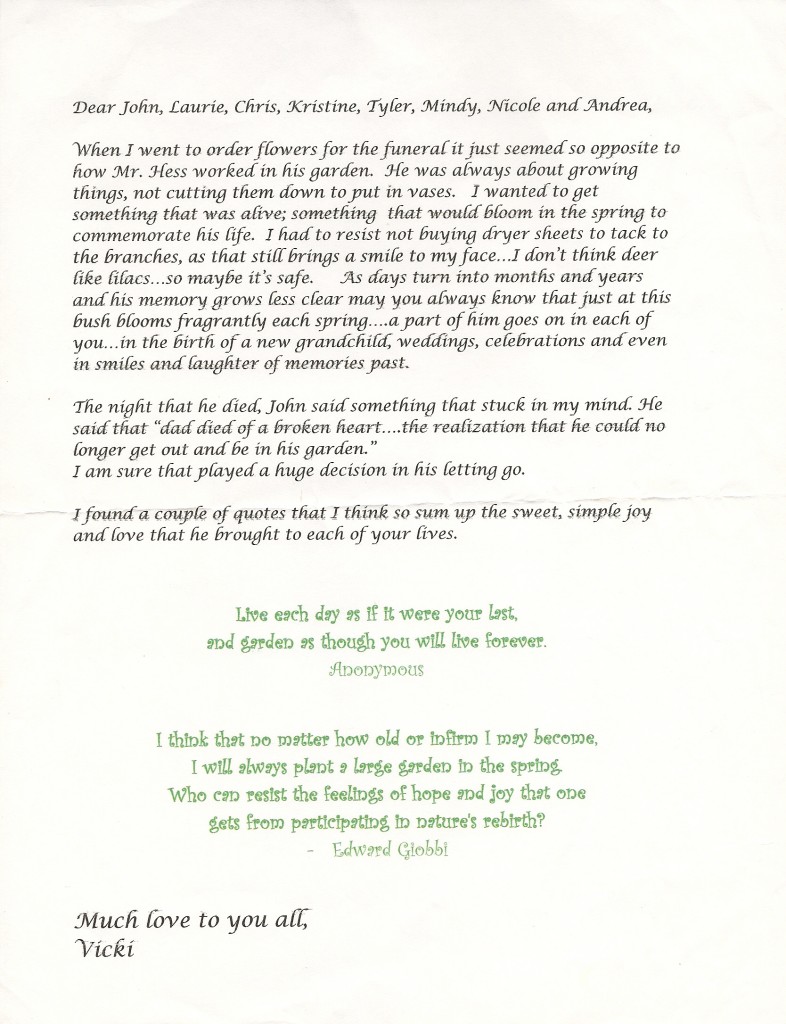 From the online Guest book I found:

In the late 1970’s my dad worked for Rodger Pellegrini and his wife.  They had bought a large factory and converted it into several apartments.  Their apartment was the main floor with 30 foot ceilings. I helped him with some of the work including replacing the hot tar roof.  For the most part they went with an open floor plan.  My dad built a loft on one end for the bathroom and several bedrooms.  For beams he used rough hewn lumber some of which was at least 10 X 10.

He was then contacted by Rodger’s parents, Bruno and Frances Pellegrini to re-do their kitchen.  They were photographers and were doing this for a magazine spread.  I know I worked with him at there house, but I think it was at the beginning of this project.  The pictures below show his cabinets, shelves and range hood.  If you look carefully at the young girl in the picture you may recognize Erica Raab.  They told dad that they didn’t include people in the photos they took for magazines, but this picture with Erica and the cat was a classic.  The information in the center column includes a credit for the work of Frank Hess of Sparkill, NY. 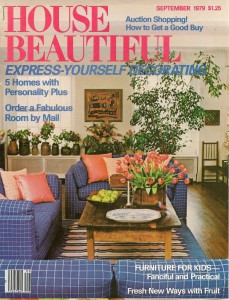 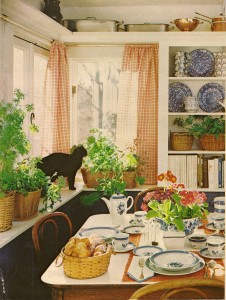 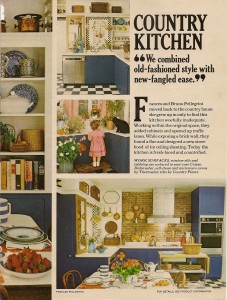 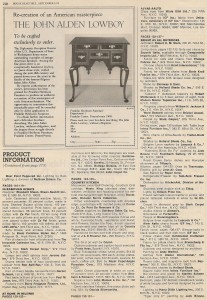 This is the area of our genealogy that needs the most work.  From the file below you can see that we have only a couple of generations on this line and I think some of these names may be incorrect.  I need to review my data and compare with what my cousins have and see if we can get it straight.

I found this picture while I was looking for the picture we have of Marie Kuba and I just felt like I should share it.  On the back it says:

This was a picture Sister Polly Roucek shared with us taken at her and Joe’s 40th Anniversary party at Hickories Park in Owego, NY. 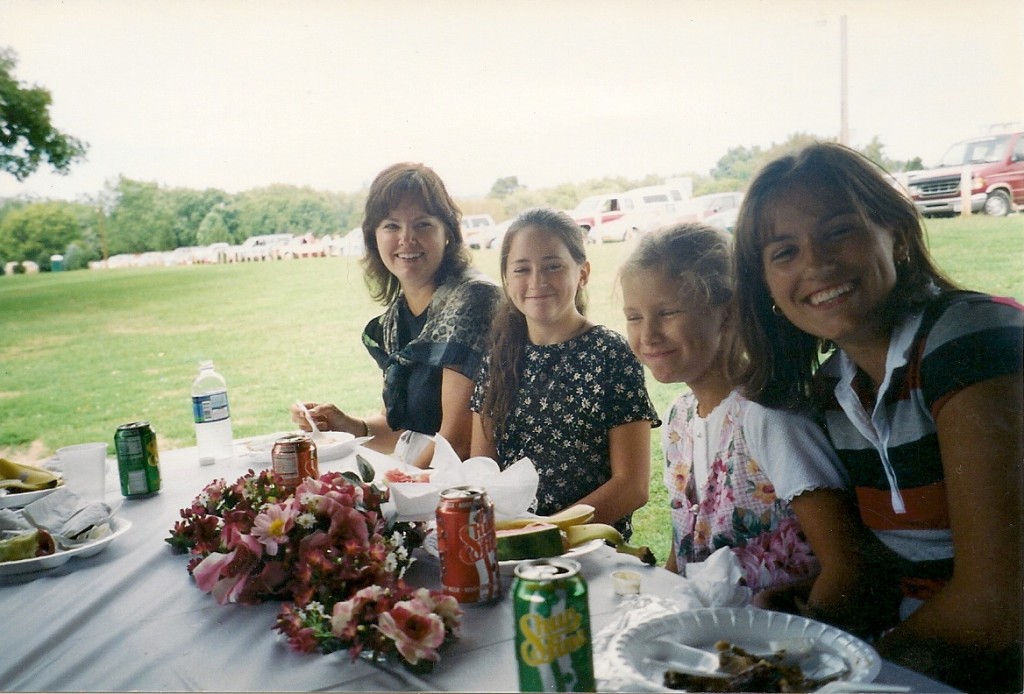