The other day I was visiting with my mother and she had just gotten off a phone call from her friend Frieda Mueller.  As we were talking she said she loved it when Frieda would tell stories from when she was young in prewar Germany.  We then discussed how important it is to capture those stories.  Mom said I hope she has them written down, and I responded yeah, but they are probably in German.  Mom then started telling me her own story that she was reminded of by talking with Frieda.

“When I was a little girl, probably around eight, I was in the garden weeding with my grandmother (Elizabeth Maria Moehring whose parents both came from Germany, and German was spoken in their home).  As we  were weeding, a garter snake came my me and I screamed.  My grandmother reassured me ” Don’t worry about him, he is more afraid of you than you are of him.”  I remember this like it was just yesterday.”

I don’t think I had ever heard that story before, and if I didn’t share it here, it would probably be lost forever.

Do you have similar stories that are a part of you that would be good to share that haven’t been written down somewhere?  What are you going to do about it?

The attached pictures are of an ID card that my grandmother had when she worked for Bell Labs in New York City.  She went to Tappan Zee High School in Piermont NY but then went to a business school in NYC to finish-up.  This was probably her first job since the date on the back was 10/1/18 and she was only 18 years old.

Bell Labs was the research arm of the Bell Telephone Companies.  What was known as AT&T (American Telephone and Telegraph).  Bell Labs is still a part of AT&T today.  Verizon was a Baby Bell that was broken off in the 1980’s. 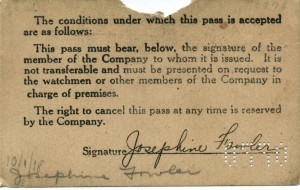 The chart below shows the first seven generations of ancestors we know about for my mother.  Some of these lines go back another six or seven generations.  What this doesn’t show are the siblings of our direct line ancestors and their families.