In my recent genealogy research I have come across individuals who listed Doodletown as either where they lived or where they were born. I knew it was a part of the Town of Haverstraw in Rockland County New York, but I didn’t know what happened to it. I never heard of it as I was growing up. This article gives some background as to where it was and what happened to it. https://www.atlasobscura.com/articles/new-york-ghost-town-growing-graveyards

There are other records that list people as living or being born in Bear Mountain. These could have been in Doodletown, or other hamlets that were taken over by the Bear Mountain State Park or Harriman State Park.

I will need to do more research on these locations.

The research of my family began after my grandmother passed away in February 1988. As we went through her house, cleaning it out, we kept finding hidden treasures. A stack of old pictures in one closet, a Marriage certificate in another, mementos in the back of a drawer, etc. Her dresser turned out to be a real treasure chest. In her dresser we found several obituaries (Including the one for Clarence Post (PHOTO below) who died at age 5.) which gave us detailed information about our ancestors which we could not have gotten in any other way.

Finding this wealth of information got me and my younger sister interested in getting our genealogy started. We sat down with our mother, and pulled together all the names we could into pedigree charts and family groups. (We did not have any forms yet, but we started gathering data.)

My mother asked me to keep all the records we found and to be the family genealogist. My sister though was the one who had the greater desire to find our ancestors. What really got her started was an old bible we found in our parents attic. It listed about thirty births, deaths, and marriages. Unfortunately, we could not tie any of the names in it with the ones we already had, and that bothered her.

When she went back home to Orem Utah she took those names, along with the information we had gathered on our ancestors, with her. The week after she returned home, she went to the branch Family History Center at BYU. There she was met by a friendly librarian who helped her to get started in researching our ancestors. On that first visit she found new information on at least ten of our ancestors. She tried to return weekly to the center to continue her research. One of the best sources she found was the US Census. There she was able to find families living together, with children’s names, and ages, total number of children born in the family and more. She also found that the census was not always accurate. Some children aged twelve or more years from one Census to the next.

Her research provided additional insight into our past. Another great-great-grandfather served in the civil war. From his military records we learned he enlisted as a musician and served from the eleventh of May 1861 until the twelfth of August 1861 a total of ninety days. One of the major battles that occurred during that time frame was the first battle of Bull Run.

From affidavits included in his military records used to secure his widows pension we learned of his character. One said “he proved himself to be a good moral person and not of immoral or bad habit”, another said “he was industrious, honest, sober, respectable, and devoid of vicious habits”. The records also included information on his marriage, the date, and the name and address of the church in which they were married, and information on his death.

In the 1990’s my mother also became active in doing genealogy research for our family and extended several lines back to the early 1600’s. In addition to gathering this information she entered it into Personal Ancestral File (PAF) so it was easier to follow and share.

Since the early 2000’s I have taken over her records and have been doing additional research. My latest efforts have been in gathering better sources and looking for a better way to share this information with my family. This website is the method I have chosen to share this data.

In March I indicated that I was going to try and start over in adding posts to this website. Soon after that the site was compromised and I couldn’t add any posts. Also I haven’t spent time in developing content.

I Hope to do better.

Well, RootsTech 2022 just ended yesterday and I am excited to revive this blog and add stories and pictures of my ancestors, their cousins and other family and events.  I also envision discussing some of the Brick Walls I have come across and some of the other challenges I have solved in my research efforts.

I am sure that this will be a re-learning process as I go along and try to use updated software and other tools in sharing my family.

I was going through some genealogy papers from my father-in-law LaMar R Pincock and found the following stories about several of his Richards ancestors.  Some if them were shared at various gatherings of the Richards Family Association.  These stories were all typewritten on the old long form family history records which didn’t lend themselves to be easily scanned fully.  They have been digitized and reformatted to a standard size (8 1/2 X 11) page.

Franklin A. Richards gave a nice summary of the three sons of Joseph Richards who wound up in Utah including his grandfather Phineas Howe Richards.  They can be found here:  remarks-by-franklin-a-richards

The other documents all relate to Samuel W. Richards.  This first one describes how he received Oliver Cowdery’s last testimony of the restoration and includes that testimony.  It can be found here: samuel-richards-oliver-cowdery-testimony

I always like to find more information about ancestors than you can just find out from the family group sheets, pedigree sheets and even census records and this is a gold mine of such information.

In going through the records and documents my mom had, I came across the program for the Tappan Zee H.S. First Annual All Sports Banquet.

The reason it was saved is because my mother’s brother John Post was one of the athletes.  This was his junior year.  In addition My mother Mrs. Frank Hess and my grandmother Mrs. Charles E. post served on the committee for the banquet.

Two of the Distinguished guests were Phil Rizzuto then shortstop of the New York Yankees and Peter Carlisimo who then coached Football at Scranton University and later let the NIT tournament.

John Post wound up his high school career with 16 varsity letters.  This was the most ever earned by any athlete in Tappan Zee High School history . His Senior yearbook lists the following:

I was going through some of my mom’s things and came across a large book (11 X 17) called “The Passing Show”  I could tell it was old but I didn’t know why she had it.  As I started to look at it, inside the front cover were the following two certificates. 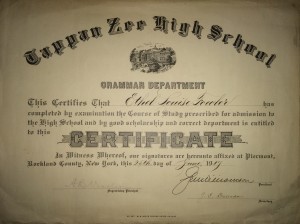 Then on the first inside page my Aunt Ethel Fowler wrote down an index of family names with pages listed.  On those pages were listed Births, Deaths and Marriages for the listed families.  This work of gathering this information was started in 1954 and it looks like it wasn’t updated after the beginning of 1956 since my cousin was listed but I was not.  I will need to compare this information with the information I already have in my files.

It is interesting to see that in the early 1900’s you were by law required to serve in the Fire Department.  Unfortunately for my Great Grandfather, he only lived 9 months after he became exempt.  He died at age 32 and left my Great Grandmother a widow with 3 small children to raise.  She did it by herself with the help of her parents and younger siblings.

From Aunt Ethel’s Certificate, it looks like not all students made it into High School.  It required an examination, good scholarship and correct deportment.  How many students today would meet these requirements?

Tonight I was visiting my Mom and we got talking about genealogy and family history.  Somehow the conversation turned to her friend Maxine Howell who lived in the big house across Haring Ave from her parents house.  We talked about several families that lived in that house (I remember when the Morrison’s lived there.) and that Maxine’s family rented it along with her extended family.  In any case she indicated that Maxine and her whole family worked on Handwerks Farms both in Blauvelt, NY and in Florida in the winter.  It was through this friendship with Maxine that my mother met my father who also worked on Handwerks farms.   My Dad had a car so he came to visit Maxine and her family. My Mom indicated that her and my Dad double dated with Maxine (she didn’t say who Maxine went with) to at least the Auto races in Patterson, NJ.

I always wondered how my Mom and Dad met each other.  I remember my mother talking about going to the Hess farm in Old Tappan NJ for strawberries and eggs, but that was when she was young.

I didn’t know that Handwerks had a farm in Florida and that my Dad had been down there before he met my Mom.  When they got married they moved to Florida and farmed.  Now I know why.

Mom mentioned Maxine’s aunt in Florida that she kept in touch with and I said “Is that the one who would send us Christmas gifts that were either the wrong size or something we would never use?” and she replied “Yes, at least she was thinking of you.”

Does anyone else have more to add to this story?

If you are interested in where Handwerks farm was, the old farmhouse is on the corner of Blauvelt Rd and Van Wyck Rd in Blauvelt, NY right next to the South Orangetown Middle School.  A large part of the area surrounding the farmhouse was part of the farm.  The school was built on part of the farm.  My sister Karen was in the first class to go through that school for all 3 grades, sixth, seventh and eighth. My cousin Debbie and I were in the second class to go there for three years.